Kampong Phluk is a cluster of three villages of stilted houses built within the floodplain of the Tonle Sap about 16 km southeast of Siem Reap. The villages are primarily Khmer and have about 3000 inhabitants between them. Flooded mangrove forest surrounds the area and is home to a variety of wildlife including crab-eating macaques. During the dry season when the lake is low, the buildings in the villages seem to soar atop their 6-meter stilts exposed by the lack of water. At this time of year many of the villagers move out onto the lake and build temporary stilted houses. In the wet season when water level rises again, the villagers move back to their permanent houses on the floodplain, the stilts now hidden under the water. Kampong Phluk’s economy is, as one might expect, based in fishing, primary in shrimp harvesting.

Kampong Phluk sees comparatively few foreign visitors and offers a close look at the submerged forest and lakeside village life as yet unperturbed by tourism. The area can be reached by boat from the Chong Khneas or by a combination of road and boat.

Kampong Khleang is located on the northern lake-edge about 35 km east of Siem Reap town, more remote and less touristed than Kampong Phluk. Visitors to Kampong Khleang during the dry season are universally awestruck by the forest of stilted houses rising up to 10 meters in the air. In the wet season the waters rise to within one or two meters of the buildings. Like Kampong Phluk, Kampong Khleang is a permanent community within the floodplain of the Lake, with an economy based in fishing and surrounded by flooded forest. But Kampong Khleang is significantly larger with near 10 times the population of Kampong Phluk, making it the largest community on the Lake.

The area can be reached by boat from the Chong Khneas docks or by a combination of road to Domdek on Route #6 and then boat to the village, the best method depending on the time of year. During the dry season, boats cannot get all of the way to the main villages.

Kbal Spean (its name means “Bridge Head”) is an Angkorian era site on the southwest slopes of the Kulen Mountain, nearly 55 km from the heart of Siem Reap town. It is commonly known as the valley of a 1000 Lingas (the symbol of the God Shiva’s supreme essence). It consists of a series of stone carvings in and around the Stung Kbal Spean river. The motifs for the stone carvings are roughly three: myriads of Lingas, depicted as neatly arranged bumps that cover the surface of a rock; Lingas-Yonis (female genitalia) designs; and various Hindu mythological motifs, including depictions of gods and animals.

Kulen Mountain (its name means “Lychee Mountain”) is around 60km north of Angkor Wat and one of the holiest places in Cambodia.  The waters of the Siem Reap river, so important for the Angkor Empire, Flowed from this mountain, and visitors can still see the fertility symbols carved into the riverbed centuries ago to ensure continued prosperity. Holy men study here and ascetic hermits live in ancient pagodas.  It was at Kulen that the Devaraja cult was born, turning the human rulers of the Khmer into gods.  Pilgrimages are still made to the mountain, And visitors can swim in the clean, cool water and examine the carvings, waves of butterflies swooping past and off into the lush jungle around. Kulen Mountain is also the sight of the Reclining Buddha monument, a massive statue carved whole out of the mountain top in the 16th Century.  During the Indochina War, bombs were dropped all around the Buddha, but none destroyed that statue.  It is now a popular place for Khmer to make picnic

Beng Mealea Temple (its name means “lotus pond”) is nearly 80km from Siem Reap town at the foot of Kulen Mountain. It was built as Hinduist temple, but there are some carvings depicting Buddhist motifs. Its primary material is sandstone and it is largely unrestored, with trees and thick brush thriving amidst its towers and courtyards and many of its stones lying in great heaps. For years it was difficult to reach, but a road recently built to the temple complex of Koh Ker passes Beng Mealea and more visitors are coming to the site.

Built in the 12th Century, many scholars believe it was the model for Angkor Wat. It is just as wonderful of a temple but it is still largely lost in the jungle.

The accommodations made for tourists at Angkor Wat and Angkor Thom have not been made here, and visitors enjoy a much quieter and adventurous experience.

Koh Ker Group located more than150 km northeast of Siem Reap town in the province of Preah Vihear, it was briefly the capital of the Khmer empire between 928 and 944 under king Jayavarman IV and his son Hasavaraman II. After the Khmer empire had been established in the Angkor area (Roluos), Jayavarman IV moved the capital in 928 almost 100km northeast to Koh Ker. Here a vast number of temples were built under his reign, until his successor returned to the Angkor area about twenty years later.

The Koh Ker site is dominated by Prasat Thom, a 30 meter tall temple mountain raising high above the plain and the surrounding forest. Great views await the visitor at the end of an adventurous climb. Garuda, carved into the stone blocks, still guard the very top, although they are partially covered now.

Across the site of Koh Ker there are many prasat or tower sanctuaries. A couple still feature an enormous linga on a yoni that provides space for several people. The outlet for the water that was sanctified by running it over the Linga can be seen in the outside wall of one of them. In other cases, three prasat stand next to each other, dedicated to Brahma, Shiva and Vishnu. Most of them are surrounded by libraries and enclosures, many also had moats. At that time, the roofs were still made of wood. Today, only the holes for the beams remain in the stone structures.

Preah Vihear Temple is a Khmer temple situated atop a 525-metre (1,722 ft) cliff in the Dangrek Mountains, in the Preah Vihear province of northern Cambodia and on the border of Kantharalak district (amphoe) in Sisaket province of eastern Thailand. In 1962, following a lengthy dispute between Thailand and Cambodia over ownership, a majority of the International Court of Justice (ICJ) in The Hague awarded the temple to Cambodia.

Affording a view for many kilometers across a plain, Prasat Preah Vihear has the most spectacular setting of all the temples built during the six-centuries-long Khmer Empire. As a key edifice of the empire’s spiritual life, it was supported and modified by successive kings and so bears elements of several architectural styles. Preah Vihear is unusual among Khmer temples in being constructed along a long north-south axis, rather than having the conventional rectangular plan with orientation toward the east. The temple gives its name to Cambodia’s Preah Vihear province, in which it is now located, as well as the Khao Phra Wihan National Park which borders it in Thailand’s Sisaket province and through which the temple is most easily accessible. On July 7, 2008, Preah Vihear was listed as a UNESCO World Heritage Site.

Sambor Prei Kuk is a very old, and rarely visited, temple located a four hour drvie from Siem Reap.  The nearby Kampong Thom City is an excellent place to spend the night if you want to enjoy a leisurely trip. The drive itself is beautiful, a journey along the lush scenery of the Prey Preas River.  Villagers in this area specialize in meals that include crickets, spiders, and frogs as well as sticky rice. The Sambo Prei Kuh temples were the second capital of the Khmer Empire and were built in the 7th Century by King Isanvarman I.

Preah Khan Kompong Svay or Bakan Svay Rolay, there are few historical data about Preah Khan Kompong Svay. French scholars argued it had been founded in XI century, probably by Suryavarman I. It was a royal residence during the kingdom of Suryavarman II and even Jayavarman VII lived here, before recapturing the capital city of Yasodharapura from invading Chams in 1181, and improved the complex.

It’s about 170km from Siem Reap city and driving is very scenic, winding through farms and poor hamlets of Khmer, many of whom have never travelled outside of their small communities or to a city. Visitors must travel from Siem Reap by Car.

Banteay ChhmarTemples is located in Banteay Meanchey Province and about 20 km east of the Thai border and was constructed during the reign of Jayavarman VII in the late 12th or early 13th century. One of the temple’s shrines once held an image of Srindrakumara rajaputra (the crown prince), probably a son of Jayavarman VII. The long Old Khmer inscription found at the site (K.227), and now on display in the National Museum, Phnom Penh, relates how this prince or a king (samtac) was protected on two different occasions by four royal servants, all of whom lost their lives in his defense. The inscription lists the names of these officials and informs us that their respective images were once placed in the four corners of the shrine. 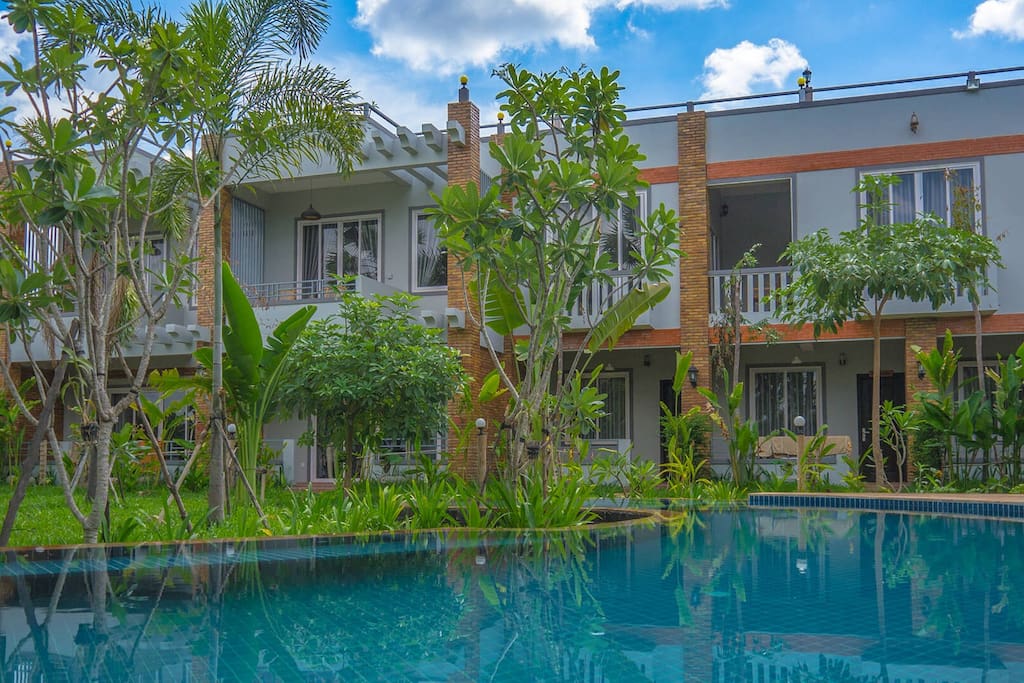